You are here: Home1 / Lew Frederick 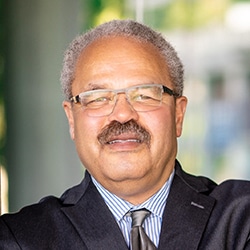 Oregon State Senator Lew Frederick first took office on October 30, 2009 during a swearing-in ceremony as an appointed representative from House District 43. In 2016, he was elected to Senate District 22, representing most of north and northeast Portland. Professionally, he is a Strategic Communications Consultant, focusing on Strategic Planning, Community Relations, Science/Technical issues and Media Crisis Communications. Senator Frederick is a former board member of the Oregon State Board of Education, Oregon Shakespeare Festival and Oregon Museum of Science and Industry. Born in Pullman, WA, he has only Alaska to visit to reach all 50 states. He grew up in the South, Midwest and New England and went to college in Indiana (Earlham College). He’s a PhD candidate at Portland State University and has studied at MIT, Morehouse, and the Woods Hole Marine Biological Laboratories.

Senator Frederick’s experiences as a youth in the 1960s with his parents during the Civil Rights Movement anchor his commitment to service and making people’s lives better. His legislative focus is on justice in public safety, education, and economic security, “quality of life” issues for Senate District 22 and beyond. With an academic background in biology, theater, and political science, his professional life has included seventeen years as a television reporter at KGW-Channel 8 in Portland, thirteen years as the Director of Public Information for the Portland Public Schools, teacher, actor and ranch-hand.