You are here: Home1 / Dennis Linthicum 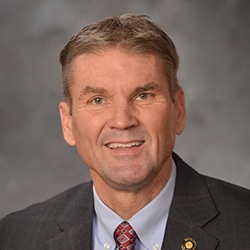 Senator Dennis Linthicum is a businessman, rancher, irrigator, and former Klamath County Commissioner who has been steeped in information technology for most of his career. He has served as both Vice Presidents and Senior Vice President for various IT concerns and was formerly a licensed Oregon construction contractor (CCB) member.

For several years Dennis has been writing as the Dirt Road Economist, where he brings relevant insight regarding local economies and their meaningful contributions to the marketplace. Rural economies bring raw, natural resources into Oregon’s global marketplace where cities and industries can create and supply finished products. One of his favorite quips is, “Since, it all starts down some dusty dirt road, it all boils down to dirt road economics.”

His educational background includes a Bachelor’s Degree in Economics from UCLA and a Master’s Degree from BIOLA University.